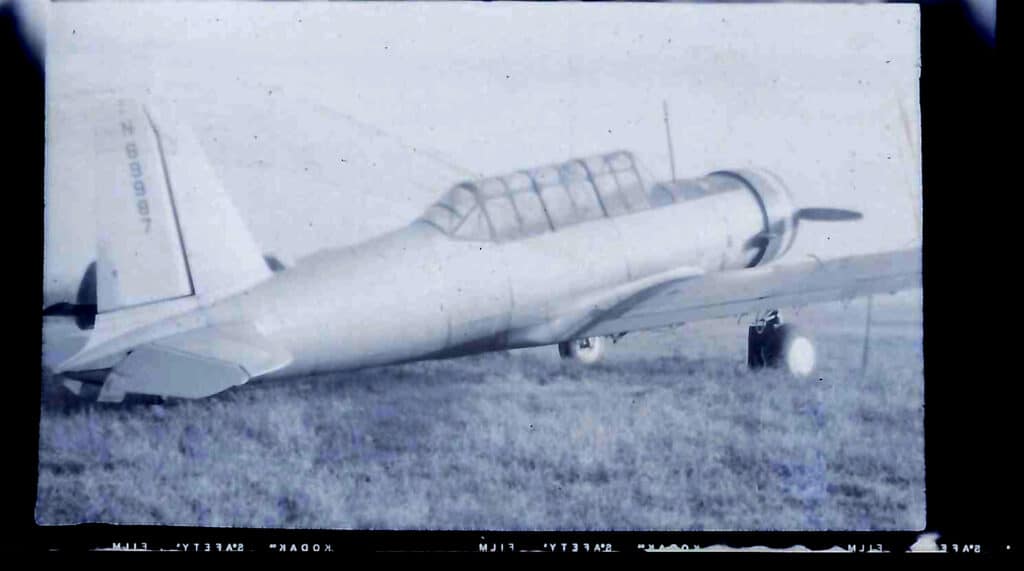 The Wings of the North BT-15 is nearly the completion of its 16 year restoration at the Wings Restoration hangar on the north side of Flying Cloud Airport. On Saturday, July 25, a visitor came to the hangar to tell some stories of the aircraft. His name is Mike Pachnik and his father Chester and uncle Edward were the last people to own and fly the aircraft before it was acquired by Wings of the North friend Mike Rawson in 1992. Chester’s widow (and Mike’s mother) Martha died in April of this year and while her son Mike was cleaning out the family home so that it could be sold, he came across some information and photographs he thought the museum might like to have. It included Chester’s pilot logbook, his pilot license, his mechanic license, and many photographs among other things. It also included stories about Chester and Ed to provide some context to their ownership of the airplane.

Ed was born near Objibwa, Wisconsin in 1921 to Stanley and Anna Pachnik who immigrated to the United States from Poland in 1911. Ed was 20 years old when the United States entered World War II and became a B-17 Flying Fortress pilot in the 95th Bomb Group, 355 Bomb Squadron based in England. According to a 95th Bomb Group memorial web site, Ed flew 12 missions at the tail end of World War II. Information on his missions can be found here: https://95thbg.mmsw.eu/person/5074

After the war, he worked as a mechanic residing in the Chicago area. Chester died in 1991 after a tractor accident on his farm/private airport near Radisson, Wisconsin. His obituary says he was also a member of the Experimental Aircraft Association.

Chester was also born in Ojibwa, Wisconsin. He was ten years younger than Ed, having been born in 1931. Chester was also a veteran having served in the Korean War as a member of the United States Army. After the war, he worked to obtain his private pilot’s license. His first flight according to his log occurred on March 6, 1954 from the now defunct Harlem Airport which was located near Oak Lawn, Illinois – a Chicago suburb. More information on the historic Harlem airport can be found in this Air&Space article from 2010: https://www.airspacemag.com/history-of-flight/the-other-harlem-5922057/?all

His early flights were in a Piper J-5A, but on October 16, 1954 Ed and Chester purchased BT-15 N69987 from Glen Ehnert in West Bend, Wisconsin. The duo filed a ferry permit to move the airplane from West Bend to the Chicago area on October 24, 1954. Chester’s log book shows the flight to and from Harlem. His first flight in N69987 was on March 3, 1955 and he flew the airplane a total of eleven times. Most of his flights are shown in the log page shown below.

Chester ultimately earned his Airframe and Powerplant Mechanic’s license and relocated to the Minneapolis area where he worked at Northwest Airlines until he retired in 1995. Below is an image of Chester working on a propeller replacement on one of Northwest’s Boeing 377 Stratocruisers.

Chester continued flying small planes until October, 1965. His last logged flight was around the local area. In this case, his log book states that the local area was Flying Cloud Airport. Chester died in 2013 and is buried at Fort Snelling National Cemetery.

By September of 1955, the N69987 had stopped flying and at some point was stored in a quonset hut on Ed’s farm near Radisson, Wisconsin. It was eventually partially disassembled. Apparently at some point Ed tried to create a retractable gear version of the aircraft as the wing center section was opened up to try to make room for the landing gear. Ultimately, the airplane deteriorated in storage until Ed’s death in 1991. At that point, it was put up for sale and not quite a year later landed in the hands of Mike Rawson.

Check back as we add more to Chester and Ed’s story of their ownership of the BT-15. Many thanks to Mike Pachnik for sharing with all of us at the museum.