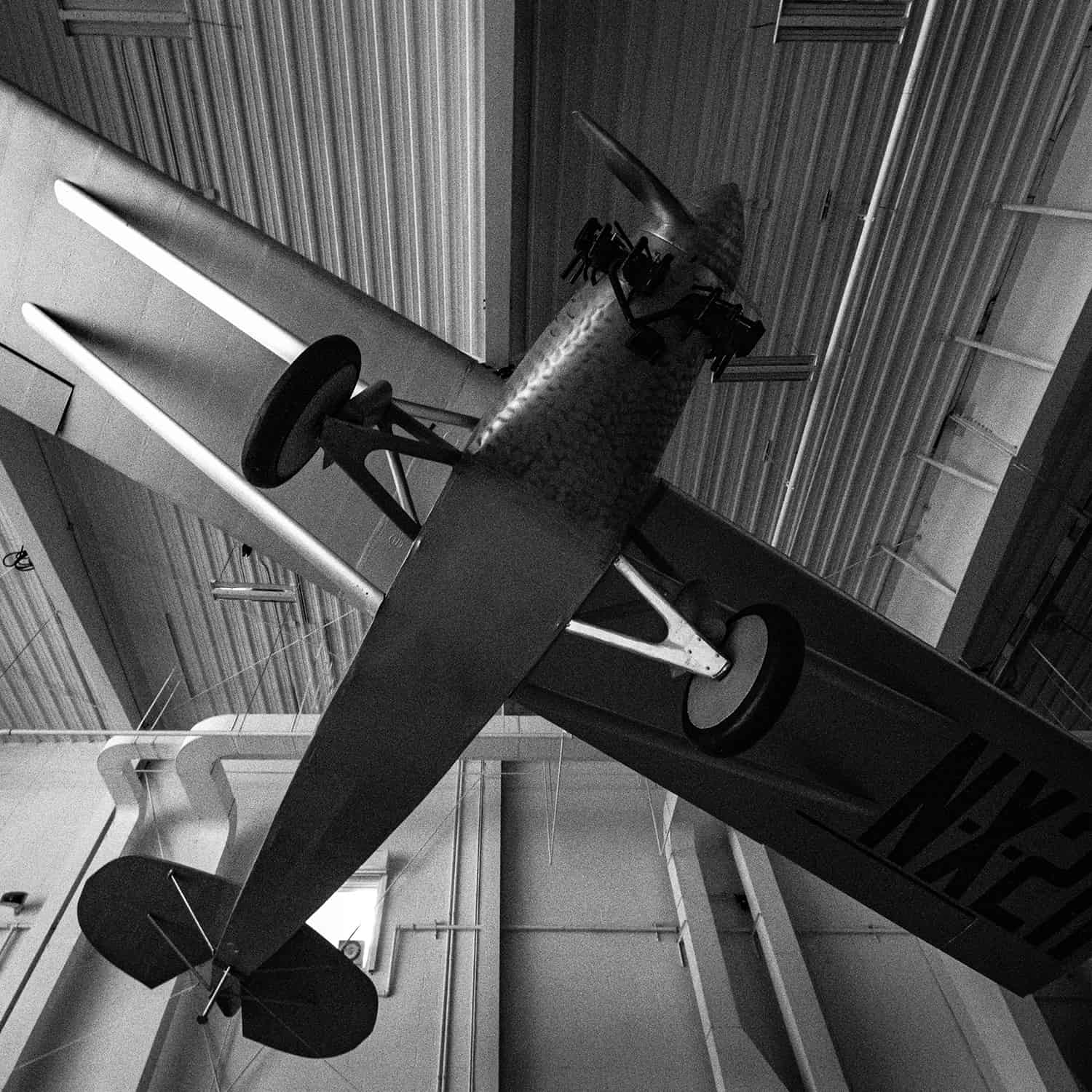 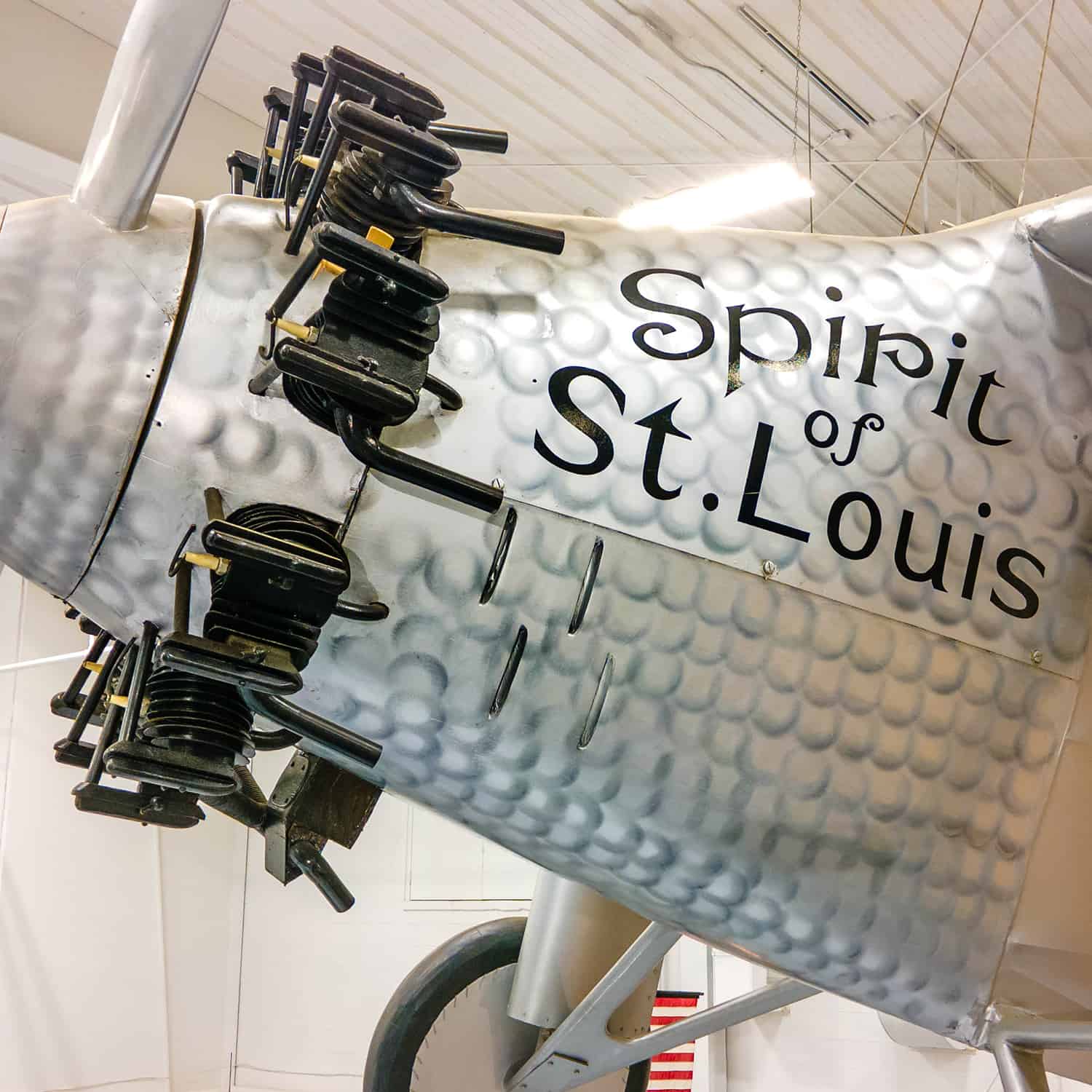 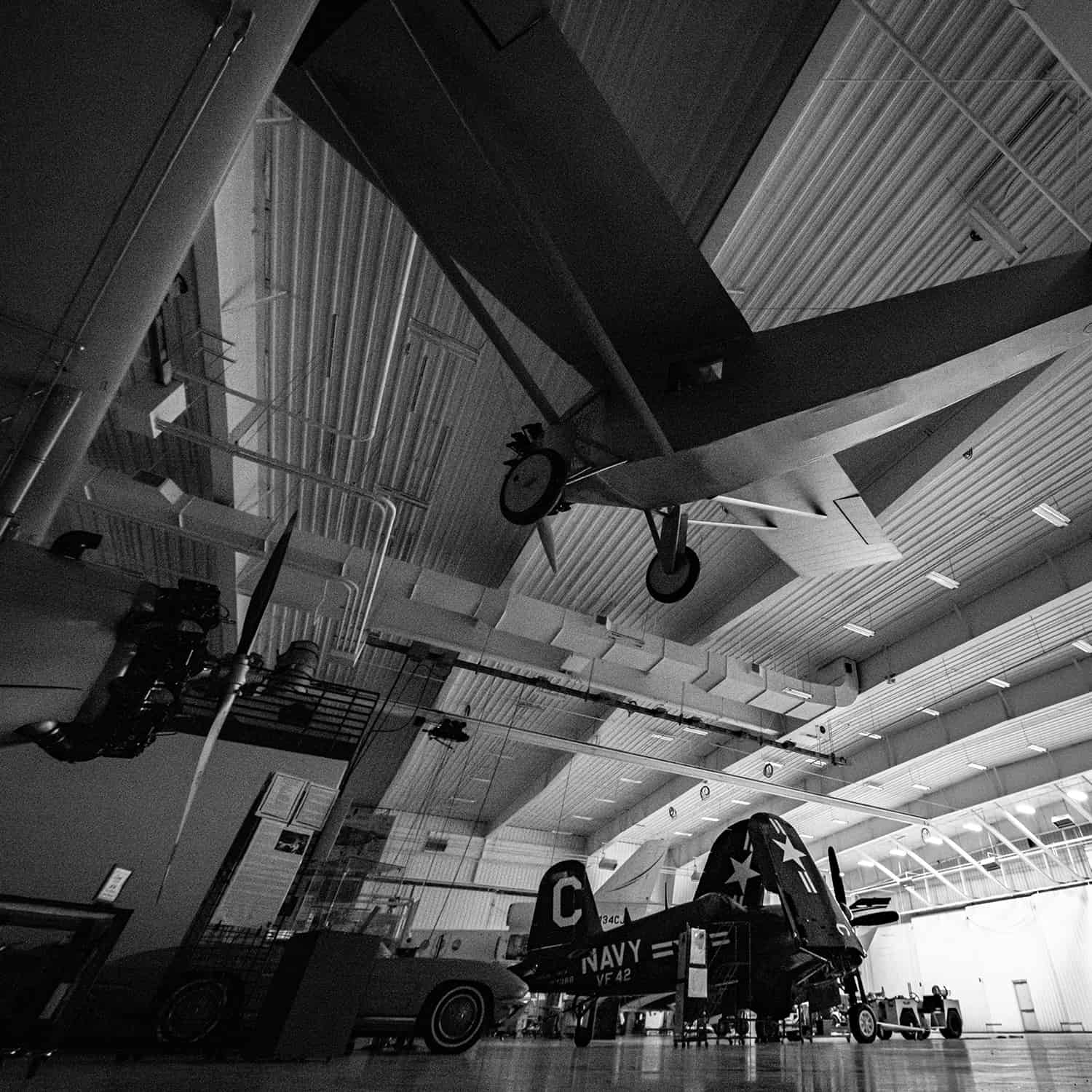 The Spirit of St. Louis Replica is on loan from the Metropolitan Airports Commission.  The narrative below describes the history of the replica.

The Spirit of St. Louis Replica in question has interesting background. It was constructed in 1956 as a sound-stage mockup by Warner Brothers Movie Studio for the film, Spirit of St. Louis, which starred Jimmy Stewart as Charles Lindbergh. The non-flying and non-airworthy mockup appeared briefly in one or two scenes in the movie, released in 1957.

Chain of ownership. From the Warner Brothers studio, the replica went into the hands of a company in Los Angeles. In the autobiography of Chuck Stone, curator of the Lindbergh Museum at Little Falls for many years, Stone wrote in 2014: “Back in early 1985, plans were developed through the combined efforts of the Lindbergh Fund and MHS (Minnesota Historical Society) to commemorate the naming of the Minneapolis-St. Paul International Airport Terminal after Charles A. Lindbergh, Jr.

“During the planning phase of this event, I received word that the owner of a variety of movie props was ready to sell a replica of the Spirit of St. Louis, previously used in ground shots for shooting the film, ‘The Spirit of St. Louis’ starring Jimmy Stewart. I passed this news on to my supervisors and the Lindbergh Fund staff. They soon had identified funds for me to travel to Los Angeles to check out the situation. I flew to LA and soon found the replica perched in between the trusses of Dennis Metosinka’s Antique Auto Display Room.” He goes on to say, “The price for this ground-bound version was about $10,000 as I recall. The deal was closed and arrangements made to truck it to the Twin Cities. I flew back and Don Padilla was already lining up volunteers in the aircraft repair business to do some restoration work on it, on arrival.”

Work was done at Burlington Airmotive at Minneapolis Airport. The replica was hung in the newly named Lindbergh Terminal for the dedication on May 20, 1985. The Minnesota Historical Society indicated in a form “Spirit of St. Louis” Agreement dated November 3, 1997 that the $10,000 purchase price was paid by R.W. “Buzz” Kaplan of Owatonna and that the Lindbergh Foundation was the owner.

The agreement states that the Lindbergh Foundation and Kaplan agreed that the replica should go to the MHS, who had some minor funding involved with the restoration. The MHS, as mentioned in the document was willing to transfer ownership to the MAC. (On September 30, 2013, a letter from Andrea Kajer, representing the MHS stated that MHS “never had title or legal custody and was not a party to any transfer”)

In the Agreement, the MHS and Kaplan then jointly signed ownership over to the Metropolitan Airports Commission with the condition that if the MAC did not decide to display it, the aircraft would be transferred back to the Historical Museum owned by Kaplan in Owatonna. The aircraft was displayed at MSP, and the Owatonna Museum closed its doors in the 1990s.

The replica hung in the ticketing area at MSP until 1996 when MAC Executive Director, Jeff Hamiel and Tim Anderson, Deputy Executive Director asked Noel Allard if members of the Minnesota Aviation Hall of Fame would be willing to do a cleaning of the replica, it having gathered dust in its lofty perch for the intervening 11 years. Allard gathered a group of volunteers and after midnight one day in the Fall, the replica was taken down and placed on the ticketing concourse where the volunteers vacuumed and washed the aircraft from top to bottom. It was re-hung later that same night.

In 1998, after some close observation, it was noted that the replica was looking pretty tired. The wings were actually sagging. The MAC again asked Allard if he would be willing to undertake a major rebuild of the replica. Allard agreed and put together a budget and timeline. Once again, the replica was lowered and this time, the wings, landing gear and tail were taken off and the replica squeezed out one of the double main doors onto the departure level of the roadway, where it was tied down on a truck provided by the MN/DOT, and trucked to the Minnesota Air Guard Hangars at the Northeast corner of the airfield. Once there, the Guard had provided working space for the volunteers to work on the plane.

During the course of the renovation, the fuselage, which was a conglomeration of scraps of wood from the Warner Brothers lumber yard in California and hot-glued together – was strengthened and had brackets installed to beef up the structure. It was decided not to build a whole new airframe at this time. The sad-looking wings were never constructed as aircraft wings, and were very brittle. Allard contracted with Ed Sampson of Belview, Minnesota, a well-respected wing builder for antique aircraft, to construct a complete new set of wing panels. The original “Spirit” had a one-piece 44-foot wing for its trip to Paris, but for ease of construction, the replica has two separate wing panels. Likewise the landing gear, merely 2×4 pine boards, was beefed up and because one wheel fell off when its pipe flange axle broke, a set of welded axles was used. For the wing struts, which again had been 2×4 pine, Allard asked the Wiplinger Company of South St. Paul, known for building aircraft floats, if they could build a set of four struts out of float spreader bar tubing. Wiplinger did this at no charge.

On September 29, 1999, the replica was taken back into the Lindbergh Terminal, re-assembled by volunteers and re-hung in its place above the ticketing concourse. The project was finished on time and under budget!

The replica was taken down by MAC personnel sometime after 2000 to make room for remodeling of the concourse.

Dimensions of the replica, per MSP maintenance records: